Things That Happen When an American Dates a British Person

Girl at bar: "Can I have a metre of vodka with an inch of tonic.."
Mark: "Oh, naughty, you've combined metric and imperial..you might get an interdenominational hangover that way."
-Peep Show
At one point or another your laptop will break, presumably while you are skint (broke) and your Brit will lend you their extra netbook. Auto correct will say you are misspelling obviously correct words such as, and definitely not limited to: analog, favorite, color, center, honor, humor, mold, program, practice and mustache. You must learn to embrace the 'u' or suffer the wrath of the red underline.

Picking a television show will become a power struggle. You will fight for your version of a show that has been aired two different ways in two different countries. You will never see eye to eye on this issue so in this case it is best to agree to disagree.

The Brit may take up art as a hobby. While they are mid drawing and pause to exclaim they need a rubber confusion may ensue. Fun fact a rubber is an eraser. The Brit does not need a condom to draw that bowl of fruit.

Sometimes you may not understand what they (the British) are saying. You have two options: go along and pretend you know what they mean when they say 'that bird has a grim Chevy Chase' or take a moment to learn. A simple 'I'm American, what did you just say?' seems to do the trick just fine.

One morning you will wake up to check the daily news and sites you used to frequent like CNN and The New York Times have been replaced by The Guardian and BBC. The BBC is publicly funded and therefore a less biased source or so I've heard.

Things like Marmite sneak their way into your diet. As an American this is simply unforgivable and should be fought tooth and nail. If a marmite free diet seems unavoidable feel free to lie to your American friends, but who are you kidding? Your American friends will have no idea what the hell Marmite is anyway.

You may notice words such as: bollocks, football, meself, arsed, bloody, bogey and bum sneak into your daily vocabulary. This happens subconsciously and may often be received by other Americans with shock and horror. Football is played with a pigskin God damn it!

For the most part the similarities between the Americans and the British far outweigh the differences. Consider your relationship a fun learning experience without which you may never have known the likes of: Louis Theroux (half American by the way), Darren Brown (wish he was popular in America) and Peep Show. 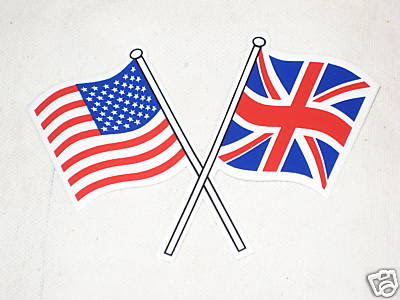