An Analysis of my Life Through Cereal

Cereal is my favorite food.

4 years old
Count Chocula-After 5 minutes of throwing a massive tantrum in the cereal aisle, my mother gave in and allowed me to get the heavenly goodness that is Count Chocula. Chocolate bat crisps, tiny marshmallows shaped like vampires and ghosts. It appealed to both the morbid and sweet tooth side of my essence. Probably the equivalent nutritional value of a chocolate bar for breakfast...the bliss that is childhood.

6 years old
Lucky Charms-I remember learning about St. Paddy's day in school and realizing come grocery day that the leprechaun on the box of Lucky Charms had something to do with this holiday. I loved everything about Lucky Charms from the packaging to the slightly sweetened crispy letters to the marshmallows shaped like rainbows, clovers and pots of gold. Like every child I did eat every marshmallow out of the box and left nothing but plain crisps to the begrudged person who would be following after me. Not to mention there was always a shitty prize in every box. Didn't matter if it was a sticker of a whale, in that moment I was happy.

7 years old
Kix-I went on a brief health kick in 1st grade when we learned about the food pyramid. I could no longer ingest cereal knowing that the sugar would one day kill me. I was so mature.

7 years and 3 months old
Cinnamon Toast Crunch-I am not sure I have ever loved a cereal as much as I loved Cinnamon Toast Crunch and that is saying a lot. As I was and still am a huge fan of anything coated in cinnamon this was like reaching Mecca and being able to bask in it's grace for years on end...that is how happy I was while eating it. It was delicious no doubt but the best part about it was how scrumptious it made the milk after you were finished eating. If a fairy sprinkled magic dust into my mouth I am sure it wouldn't taste as good as leftover Cinnamon Toast Crunch milk. I think one time a fist fight ensued between me and my younger brother for the last serving out of the box. The best of all because the tiny bits and extra loose cinnamon ended up in your bowl and subsequently in your mouth.

9 years old
Rice Krispy Treats Cereal-Not to be confused with plain Rice Krispys, this was actual Rice Krispy treat squares crushed down into bite size pieces so there was marshmallow in every bite. It was an orgasm of the mouth. Some people like to refer to this as the 'urban myth' of cereals as it would often go missing for months or even years at a time. I was happy to be back in Michigan last February and saw it sitting there on the shelf where it so rightfully belonged and quickly snatched it up. It was like finding a long lost friend.

11 years old
Cap'n Crunch-None of this peanut butter or berry bullshit, just the plain amazing goodness of Cap'n Crunch. This was a transitioning time in my life. I was discovering that cool kids don't still watch Sesame Street with their "younger sister" and image is in fact everything to the pre-pubescent child. I remember one morning in class my teacher had us all go around and say what we had for breakfast that day. The sophisticated 11 year old ate oatmeal and granola, one girl even said she had a protein shake? Well I didn't, but I sure as hell did lie about it. That morning I ate granola too.

15 years old
Grape Nuts-Ironic name for a cereal that tastes like neither grapes nor nuts but rather like sap coated tree bark. I don't know what I was thinking here.

16 years old
Multi-Grain Cheerios-Out of every cereal invented I always found myself going through mini phases of Cheerio addiction. To this day I will go to Costco and buy a mega box of the plain Cheerios and eat nothing else for a month. Multi-Grain Cheerios stood out as they had the perfect balance of sweetness between Honey Nut and plain Cheerios. Plus I was a nutrition nut and it had the word 'grain' baked right into the title.

18 years old
Cocoa Pebbles-Got a boyfriend. He encouraged me to eat as bad as he did. One time I ate two boxes of the stuff in one day. Gained 30 lbs in a year. Cocoa Pebbles also did the delicious chocolate milk thing at the end of the bowl.

19-21 years old
Everything-I call this the dark period. No stand out cereals. No stand out anything really. Unhappy relationship with my at the time boyfriend, fat, religious cult, working 40 hours a week and going to school full time at night. I remember there being a lot of granola.

22 years old
Kashi Go Lean-Broke up with my boyfriend for the final time. Was trying to be healthy before I made the move to Korea. Kashi Go Lean is the best cereal choice I have ever made. Low in calories, high in fiber, tasted good, not great but good. One of the only times during the day when I did feel like an adult was when I was eating Kashi before work. 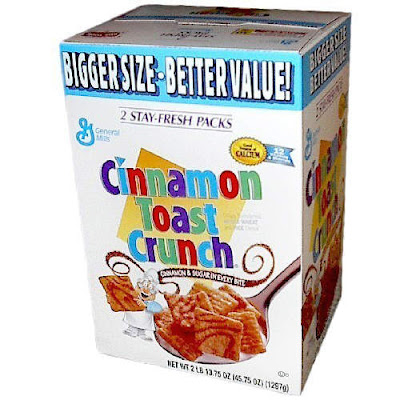