How Playing 'The Oregon Trail' Prepared Me For Adult Life

I am an activist for all gaming systems everywhere. I have owned: Nintendo, Super Nintendo (my favorite), Nintendo 64, Gameboy, Gameboy Advance, Nintendo DS, XBox and the Playstation 3. I talk a big game, I know a lot about the games but I am mediocre at best. I lack the skill and dedication it takes to really be the master of any one game yet alone multiple games. Despite my averageness I thoroughly enjoy getting immersed in another virtual world, well that and I like shooting things and narrowly avoiding hitting bananas in character driven automobiles. I am telling you all of that to say this: I hate computer games. With the exception of a brief (3 year) stint playing WOW (don't judge me) I have found only one computer game that has brought me the joy that only a console and control can bring: The Oregon Trail.

Chances are if you attended public school in North America, at some point The Oregon Trail became a very welcome part of your curriculum. The educational goal was to teach elementary school children about pioneer life on the Oregon Trail. For those of you who do not know, the Oregon Trail it was the journey pioneers made from Independence, Missouri, to Oregon's Willamette Valley. The player took the role as wagon leader and then had to protect and make the best decisions for his party of settlers. It fucking rocked! High fives all around to the education system on that one.

While The Oregon Trail can be viewed as a simple game that taught children about hunting buffalo with an arrow key and caulking the wagon to trudge rivers, in hindsight it dealt with some hard hitting life lessons.

The entire point of The Oregon Trail was to figure out which direction will get you and your wagon-'o'-people to the final destination safely. You could go north because of the promise of buffalo or you could head south to avoid the December blizzard...only one thing is certain, you must move forward. Forging a path of your own is not the best part of life, it IS life. Make wise decisions, make stupid decisions, learn from the mistakes or don't. Date the crazy girl as long as you really, really like her. Skip the gym if you feel like watching The Office instead. Have the one night stand (but use protection). Drink that extra beer. Stay out later then you planned. Make friends who matter. Eventually you'll get there, we all will.

There is one big river in The Oregon Trail, super huge. As a leader you must decide whether to save time and money by either fording the river or caulking the wagon to float it across. With this you run the risk of people or oxen drowning and the possibility of losing rations. On the flip side you save time so you do not get stuck traveling in the winter when people are more likely to get ill and there is less food to hunt. The other option is to pay to take a ferry across the river. This can be expensive, time consuming and often puts you in risk of traveling through the harsh winter. What to do? With either decision you may be risking the lives and well being of the other people in your wagon. While I am not overtly concerned I will drown a friend it is nice to remember from time to time that the things we do impact others. Perhaps it's a bitchy look you didn't even realize you gave, a joke
that rubbed someone the wrong way or an intimate encounter with someone who wasn't yours to sex all up on. Fuck, we're human, we make mistakes, we act selfishly and irrationally but if someone is walking really slowly in front of you you needn't kick them in the back of the shins, just curse under your breathe and walk around them.

Throughout the game it is possible that a member in your party would die and as if that weren't traumatizing enough for the 8 year old child the oxen were also prone to death. People would drown, get bit by snakes, suffer from measles, dysentery, typhoid, cholera, and exhaustion. Little words would flash at the top of your screen "Molly has died of dysentery." There goes your wife. There one moment, gone the next. People die, every day, I will die, you will die. It might be dragged out or it might be in the blink of an eye. When we recognize we are mortal and our days are numbered we are free to live life to the fullest. On a side note stay far away from under cooked pork.

Life Lesson #4- It is the Journey that Matters, Not the Destination

It felt like Christmas every time I arrived in the Willamette Valley a winner but without fail whether I lived or died I would go back to the beginning and play it all over again. It wasn't winning that mattered. It was so damn fun to hunt, to make decisions that could alter the outcome of your life and the other people in your wagon, to purchase and pack supplies, to pick a career...it was as close to responsibility as my 8 year old self would get. With video and computer games it's easy to rush through and beat them as quickly as possible but once it's over thats it. Sure you can play it again and again, till your fingers blister, I sure as hell know I did but it's only really special the first time you play. When you are discovering the secret passages, beating a villain, finding your strengths and working around your weaknesses. It's the same in 4-D as well. I catch myself in a constant state of trying to figure out where it is I am off to next and I forget I am living life right now. Try to really savor the food you eat. Enjoy the way your pillow forms to your head and it's coolness when you flip it over. Really take in the way your friends laughter sounds...it's breathtaking. I know the following statement reeks of cheese...but smile, a lot, life is too damn short. 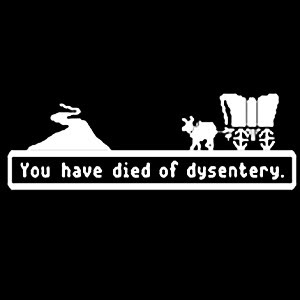